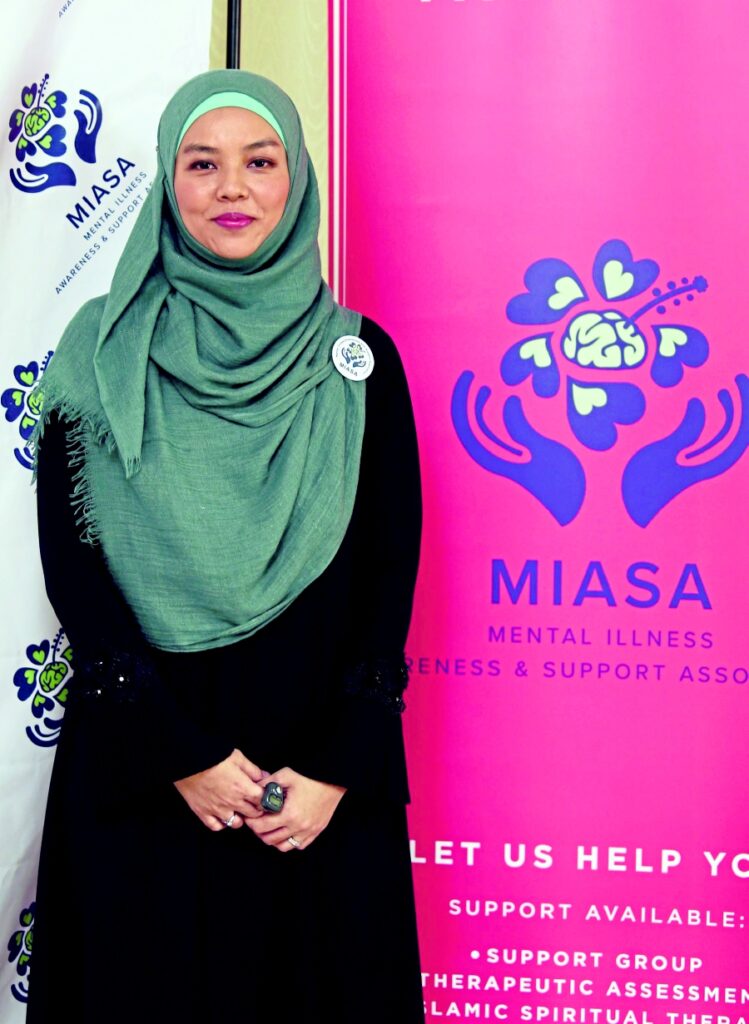 President of MIASA Malaysia & Chairman of the National Advocacy

Puan Anita Abu Bakar is the Founder and President of the Mental Illness Awareness & Support Association (MIASA Malaysia). She is a strong and known advocate for Mental Health and social issues in Malaysia and internationally. She initiated the first Peer-led Mental Health Advocacy and Support Group in Malaysia. As Anita was born and raised overseas, she subsequently pursued her tertiary education at Tulsa University, Oklahoma in the United States. She obtained a bachelor’s degree in Computer Information Systems, with a minor in Management Information Systems. Upon her return to Malaysia, Anita pursued a career path as an Investment banker, and worked in the corporate field for over 10 years. She also holds an MBA in Islamic Banking and Finance from the International Islamic University of Malaysia (IIUM).

Through MIASA, Anita champions the recovery model and the human-rights based approach simultaneously striving for non-coercive treatments and deinstitutionalization. In her passion in shaping the Mental Health Ecosystem towards a recovery model approach, she established the ‘The Orchid Clubhouse’, Malaysia’s first Mental Health Crisis management and Activity Centre which is Peer-led and Peer-run. Anita also initiated the National Advocacy for Mental Health Association (NAMhA) in 2021 and was appointed as the Chairperson for NAMH, the first peer-based mental health alliance in Malaysia. Inspired by the United Nations Convention on the Rights of Persons with Disabilities (UN CRPD), this Alliance aspires to provide a constructive platform for a louder voice to promote, protect and ensure the rights of PWDs and work towards the Inclusion of mental health peers in various aspects of life including education, employment, housing, social protection and health, home and family and more. Most recently she was appointed as a member council for the Mental Health Promotion and Advisory Council by MOH.

Puan Anita doesn’t stop there, she is also very involved in educating the public and making herself & peers heard via her participation as a guest speaker and panelist in many conferences and programmes nationally and internationally including the Good Practice Services: Promoting Human Rights & Recovery in Mental Health 2019 in Trieste, Italy where she presented on ‘No Restraint’, The Bali Plenary in Bali for TCI Asia Pacific presenting MIASA’s works and spirituality, the Symposium on Psycho-Social Disabilities for IIUM, the International Asean & Psychology conference on Stigma and Mental Health, the Malaysian Conference on Psychological Medicine on Recovery and MIASA’s Supported Employment Programme, Partnerships in Change, NCDs in Focus, Hearts and Minds ASEAN NCD Connexions Roundtable in Bangkok, organised by Viatris, the International Muslim conference, BeingMe Islamic Conference and was the first Mental Health group to ever present in Parliament on Mental Health, gaps and solutions moving forward.

More recently, on the 30th of March 2022, Puan Anita was the official selected winner of the Patient Champion for Science and Medicine award by the International Metrodora Awards hosted by the International Alliance of Patients’ Organizations (IAPO) together with title sponsor Viatris. Following her Metrodora win, Anita was invited to co-lead the Mental Health Forum in Geneva on the 5th of May 2022 as one of the panelists to discuss and present the topic, “Improving Access to Mental Health Care in Asia” from a peer approach and perspective.

One of her programmes under MIASA named Journey to Recovery and Kembara Syifa has aired in IKIM.FM, a local Islamic radio station reaching out to those struggling with mental health disorders and caregivers. She has appeared on many tv & radio channels and both digital and print media and made her first Ted talk appearance for TedxXAimsUniversity in 2021 delivering ‘A Message of Hope’ and has also been interviewed by ABC News Australia, Islamic Channel UK and was recently on the ListenWell Podcast by Viatris, discussing on Stigma and Mental Health along side Dr Javed, the President of the World Psychiatris Association. She was recently invited to be guest speaker for a new TV Channel in Malaysia called SukeTV covering 3 segments on Mental Health weekly.

Anita was formerly a treasurer for Persatuan Rumah Minda Ceria which is an assisted accommodation and rehabilitation centre for mental health peers and was also appointed Assistant Secretary for the Islamic NGO Coalition under YADIM & MAIM. She was also appointed as part of the TWG for Suicide Prevention with MOH and recently appointed as an ex-Officio for IYRES, under the Sports and Youth Ministry. She also collaborated with the Disabled Youth Organisation and help to set up a centre providing Mental Health interventions for youths in Kuala Lumpur. She organised the first International Mental Health Recovery Conference  2019  supported by TCI Global and organised the National Hope Symposium 2021 entitled “Thriving in Mental health with Meaning & Compassion.”